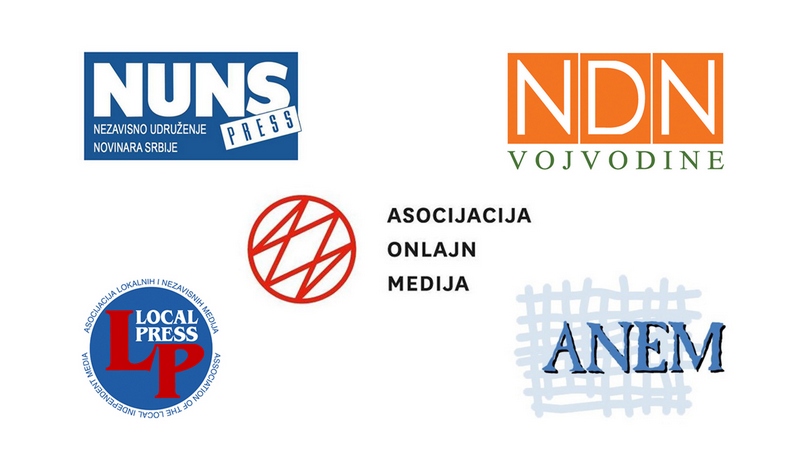 Journalists’ and media associations are warning the citizens and international institutions that the Serbian authorities have entered a new, brutal phase of the crackdown on media freedom and intimidation of journalists, with the goal to completely disable the media’s controlling role and break any free critical voice.

In just two days there were several more than worrying events. The Krik (Crime and Corruption Reporting Network) web-portal and its editor Stevan Dojčinovic are exposed to a frightening attack by the ruling Socialist Movement and individual media over the publication of research reports on the apartment of Defence Minister Aleksandar Vulin. Also, one of the most important local media, the Vranjske weekly, was shut down under political pressure, and its owner and editor Vukašin Obradović started a hunger strike. Journalist Antonela Riha, Nataša Mijušković and Jelena Obućina are brutal targets of today’s “Informer”, which calls them “yellow RTS hypocrites” and practically calls for a showdown with them.

Seemingly different, these events have an unequivocally clear common denominator, and this government has summoned all state institutions and media close to them to deal with the “unsuitable” media. As a contribution to this, the lack of adequate reaction of citizens, domestic and international organizations to constant pressures on media freedom is piling up.

Journalists’ and media associations are inviting citizens and civil society organizations to become more involved in the fight for media freedom and freedom of expression, as this is certainly not just a question that concerns only media professionals, but a precondition for any democratic process and the protection of human rights.

We call on international organizations to stop ignoring the very serious issues that journalists and media in Serbia have and to actively engage in the protection of democratic values they are committed to.

Any cookies that may not be particularly necessary for the website to function and is used specifically to collect user personal data via analytics, ads, other embedded contents are termed as non-necessary cookies. It is mandatory to procure user consent prior to running these cookies on your website.